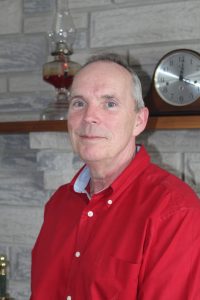 Health care sector consultant and long-time former LTC administrator Rick Gourlie worked with the Ontario CLRI to produce a webinar on LGBTQI2S+ inclusiveness in long-term care that occured in June 2019.

It was during a New York City cab ride a number of years ago that health care consultant Rick Gourlie says he came up with the inspiration for his award-winning “Mad Poster” project — a series of provocative wall posters aimed at challenging staff attitudes toward LGBTQ diversity in the long-term care (LTC) environment.

The long-time former LTC administrator — and one-time fine arts graduate — says the hateful anti-gay graffiti he saw in the Big Apple that day was shocking. With decades of health sector management experience under his belt, he understood that the graffiti was just a more graphic expression of the widespread, and mainly unspoken, homophobic sentiment he knew remained in our society, despite many advances in the last several decades.

“I believe that intolerance is an internalized process that has been learned,” Gourlie says from his Kemptville, Ontario home south of Ottawa. “A person is taught to be comfortable with it, so it becomes easy, like throwing on a favourite sweatshirt. It’s not until someone points out that what you are wearing is offensive and harmful to other people that you start to realize that maybe you should be wearing something more appropriate.”

When Gourlie became administrator for one of the City of Ottawa’s four LTC homes in 2011, he was aware that the Ottawa Senior Pride Network had approached the mayor with a serious concern: Older members of the LGBTQ community were afraid of moving into long-term care because they felt they would have to remain silent about their sexual orientation — would have to re-closet themselves — because they feared potential abuse by staff and other residents.

Remembering how powerful the street graffiti’s coarse messaging had been several years earlier, Gourlie designed some “wall art” of his own to kick-start an equally powerful conversation about respect and inclusion at work. The posters he created were meant to be seen only by staff, and depicted anonymous personal support workers (PSWs) and residents in various ambiguous workplace scenarios. For each one, Gourlie pitched a situation involving an LGBTQ+ older adult and asked the question – “what would you do?” He asked his team members to write any feedback directly onto the posters..

For example, one poster showed two male residents holding hands, and asks team members what they would do in this situation. His posters also featured situations with trans individuals. The responses were pretty predictable, but Gourlie says that with people’s thoughts now out in the open, he could use them as teaching points during staff meetings. It was all about normalizing an LGBTQ conversation at work, and helping staff understand that creating a joyful, inclusive environment was not only beneficial to everyone, but easily within their grasp.

I couldn’t jump out of the cab that day to cover the graffiti up with words of my own,” Gourlie says, “but I could certainly start a dialogue on tolerance in my workplace.

A year into his project, Gourlie was asked to introduce his Mad Posters to the other three City of Ottawa LTC homes. His efforts earned him the 2013 Individual Equity and Diversity Award from the City of Ottawa, and attracted the attention of the Ontario Centres for Learning, Research and Innovation in Long-Term Care (CLRI) who were looking for processes to promote inclusiveness in LTC. Rick partnered with the Ontario CLRI to deliver a presentation at AdvantAge Ontario’s annual convention entitled ‘A Home For All: Making LTC Homes Welcoming for the LGBTQI2S+ Community’ as well as a webinar on the same topic.

“It’s about stopping the silence,” he says. “It’s one thing to say, yes, we want an inclusive environment, but what does that look like? If we are going to make any kind of a difference in how we treat people, we have to have conversations about actions that can be taken, and about the processes that can be put in place. Long-term care should not be a place where we people are afraid to go because of their sexuality. We need to change our attitudes and our approach.”