Every month the Ontario Centres for Learning, Research and Innovation in Long-Term Care (CLRI) are sharing the stories of long-term care homes and the work they do in partnership with the Ontario CLRI. 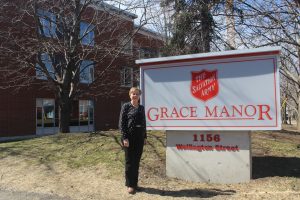 Dyna Vink serves as the chair of Ottawa Grace Manor’s integrative Family & Friends Council, which provides support on many fronts for residents, staff, family and friends.

When Dyna Vink’s mother, Harriet Franx, entered long-term care at the Salvation Army’s Ottawa Grace Manor with advanced dementia in early 2013, it marked a new beginning for both women. For the mother, it was the start of a program of care in the hands of trained staff and volunteers who were better equipped to deal with the complexities of her dementia. For the daughter, a communications professional, it offered peace of mind and a more satisfying approach to advocacy and support through the network of Ottawa Grace Manor’s Family & Friends Council.

Their journey to Ottawa Grace Manor had been fraught. Ten years earlier, Vink had moved her 80-year-old mother from Montreal into a downtown Ottawa condominium so that she could tend to her needs better. What she didn’t know then was that the amazing person she knew as her “rebel parent,” a courageous fighter in the Dutch resistance in Rotterdam during the Second World War, fluent in six languages, and a university-trained economist, was already deep in the relentless thrall of the disease that would accompany her for the rest of her life.

“Her dementia was actually farther along than we thought,” Vink says. “She did a good job of hiding it.”

As her mother became increasingly agitated by the confusion of dementia, Vink says she had no choice but to find round-the-clock care for her mother’s complex needs. But as she discovered, not every retirement home has the staff skills to care for residents living with dementia. In 2011, Vink sought an assessment from the Community Care Access Centres to determine if her mother was advanced enough to require long-term care (LTC). She was, and Vink decided to investigate what Ottawa Grace Manor could offer right in her own Hintonburg neighbourhood.

When Vink booked a tour, she was heartened to learn that her guides were former Ottawa Grace Manor family members who had continued to volunteer long after their loved ones had passed. What she also found compelling was the cheery, self-contained home areas of 25 or 26 residents who share their meals together, watch TV together in their own lounge, and are cared for by the same teams of PSWs and nursing staff.

In 2013, Franx was admitted to Ottawa Grace Manor in a crisis placement. Vink got involved with the Family & Friends Council (FFC), and a few months later accepted the chair’s position on the Council. When her beloved mother died in November 2018 at the age of 95, Vink followed the example of other family members by continuing to give back to Ottawa Grace Manor through the FFC that she still leads.

“My mother was an amazing woman,” Vink says. “She had become a shadow of her former self, and couldn’t really speak much anymore, but I am still celebrating the rebel she was.”

The Family & Friends Council at Ottawa Grace Manor is an organized, self-determined group that does its best to enhance the quality of life for all residents. It guides new families and friends through the LTC transition process, helps find creative solutions to problems, provides LTC educational opportunities to family members, and advocates in areas of collective concern.

Externally, the FFC leadership participates in information sharing meetings of the Champlain Region Family Council Network to lend its support in seeking much-needed additional provincial LTC resources, and to learn about research being conducted by the Ontario Centres for Learning, Research and Innovation in Long-Term Care at Bruyère.

One of the innovative projects the FFC has been advocating for is the Butterfly Household Model of Care pioneered by the UK-based Dementia Care Matters. It is based on creating a calming, more home-like environment that is less task oriented, with more emphasis on nurturing emotional connections with residents who are living with dementia. An Ontario pilot program run by Peel Region in 2017 offered encouraging results in terms of overall improved engagement and satisfaction for residents, families and staff. Ottawa Grace Manor is investigating, and is sending two people on the 12-day training program to start building a Butterfly framework.

Vink says she is optimistic for Ottawa Grace Manor thanks to the FFC’s positive working relationship with Executive Director Cameron McCallum, whose healthcare experience, business leadership and progressive outlook are contributing to a culture of change for the better. With a voice on the Strategic Planning and Palliative Care committees, the Family & Friends Council today plays an important integrative role in providing family input and perspective. It is an arrangement Vink says is beneficial to everyone.

“We are part of the vanguard here at Ottawa Grace Manor where a family council is working closely with management,” Vink says. “There has been a progressive move towards taking help where it’s offered, which I think is excellent. We aren’t compelled to say anything, so our voice carries different weight, and I’m delighted that we are finding ways to work together.”